Gill, from Staffordshire, won a workshop with me in a competition run by Craftseller Magazine.. 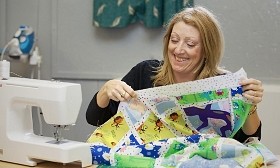 Gill chose to come on two Sundays in May to learn how to make a Magic Tile quilt top. Although she had previously done a lot of sewing, this was her first venture into patchwork and quilting and she threw herself in at the deep end, learning lots of new techniques She was in good company, for, although most of the group was made up of members of my Beginner and Intermediate courses, Evie, from Mid-Wales, also new to patchwork and quilting, was a member of the class. She had been bought the workshop, as a birthday present, by her mother. 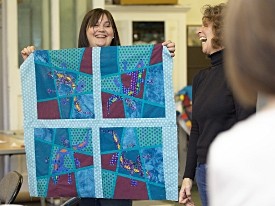 Gill and Evie settled really well into the group and the results are very impressive. If they lived nearer they would both be under pressure to join my next Beginners Course in September.   Dorothy